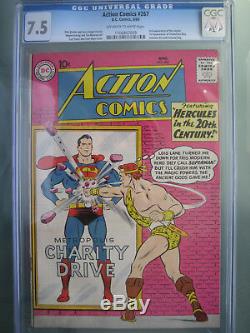 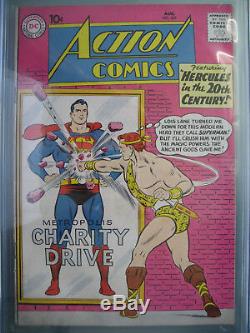 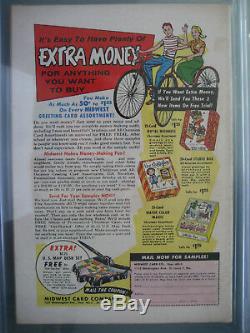 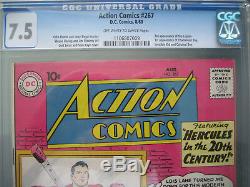 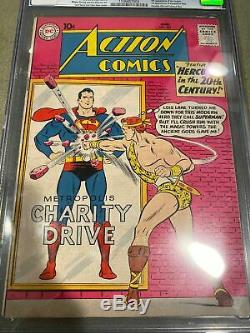 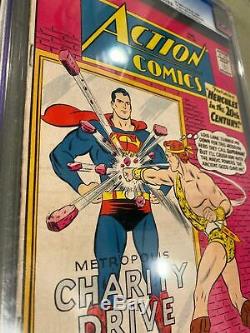 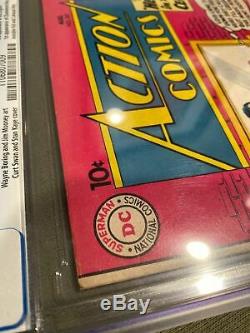 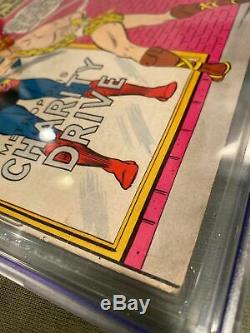 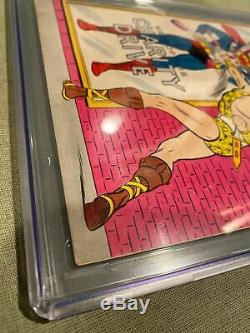 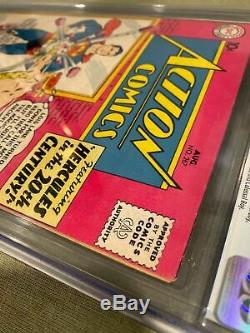 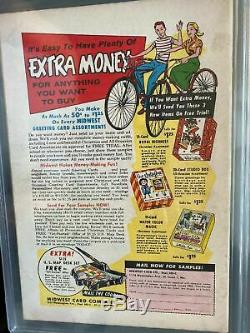 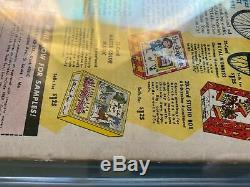 1 of 12 CGC 7.5 Universal. Hercules in the 20th Century! Although he is locked away in prison, Lex Luthor.

Is able to build a time projector device using solar energy to power it. He uses the device to pluck Hercules. Out of the ancient past and make him appear in the present. Luthor tricks Hercules (by telling him he was imprisoned by an unjust king who took his gold) into breaking him out of prison.

Taking Hercules to one of his secret labs, Luthor uses a device to teach him English and educate him on the 20th Century. Hercules is interested in news broadcasts about Superman. And Luthor intends to "tell" Hercules all about the Man of Steel after they get back "his" gold. Later, when Hercules learns that he was tricked by Luthor into committing a crime, he saves the Man of Steel by throwing a chunk of Green Kryptonite.

That Luthor intended to use on Superman. Superman and Hercules then easily capture Luthor and turn him back over to the authorities. Afterwards, Hercules asks Superman to allow him to explore the 20th Century. Agreeing Superman sets him up in a civilian identity of Roger Tate, and takes him to the Daily Planet.

There Clark gets him a job as a photographer, and Hercules is instantly smitten by Lois Lane. When he's sent on assignment to photograph a lion tamer, "Tate" goes into action as Hercules when the animals break loose. Later he is ordered by Perry to bring Lois her lunch. Lois is at the Acme Studio posing for Moon Kiss Perfume, and he is even more enchanted by her when he sees her in costume.

Eventually, Hercules proposes to Lois Lane and reveals his true identity to her. Lois declines his offer of marriage, telling him that she only loves Superman, but she will respect his secret identity. Over the coming days, Hercules attempts to impress Lois with a series of super-feats, however they pale in comparison to what the Man of Steel is able to do. Jealous and seeking more power, Hercules takes an assignment in Greece.

Arriving there he goes to the Cave of the Oracle and summons the Oracle. The Oracle then opens a portal to the temple of the gods. There he meets with Jove. And asks them to grant him with their powers so that he might be able to defeat Superman.

Granting him with their powers, the Gods send Hercules off with their blessing, the demi-god returning to Metropolis. And vowing to defeat Superman. After watching a demonstration put on by her cousin Superman. In her civilian guise of Linda Lee, Supergirl. Is visited by three teens who can exhibit extraordinary powers and happen to know Supergirl's secret identity.

Supergirl decides to finally investigate when these teens manage to activate her Linda Lee robot. Upon confronting these teens, they reveal themselves to be Cosmic Boy. Members of the Legion of Super-Heroes. When Supergirl recalls her cousin telling her of his induction into the Legion when he was Superboy. The Legion members tell her that they are the children of the original Legion and that they want her to join their ranks.

Traveling to the 30th Century, Supergirl meets other new members of the Legion: Chameleon Boy. Who can change shapes, Invisible Kid. Who can turn invisible, and Colossal Boy. Who can grow to titanic heights. Her initiation into the group would require her to perform a super-feat for them.

When it's learned that there is too much air traffic on the planet Earth. Supergirl digs a tunnel through the planet wide enough for air ships to fly through in order to lighten the load. Dismayed, the now Superwoman uses her X-Ray vision to find the cause, and finds that there was a chunk of Red Kryptonite. That caused the change in her body.

The Legion regretfully tells Superwoman that she will not be able to apply for membership for another year. Returning to her own time, and after the effects of the Kryptonite have worn off, Supergirl (in her civilian guise of Linda Lee) wonders if she'll be invited into the Legion again.