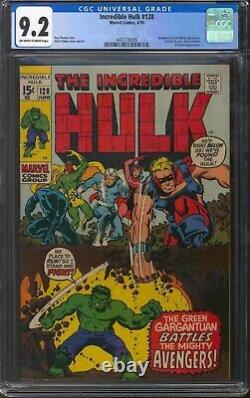 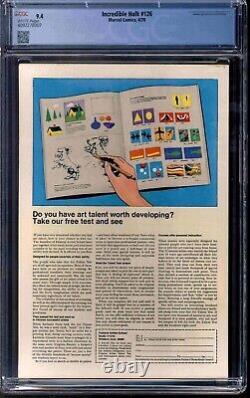 Degree Of Restoration: Unrestored BayshoreComics Comments: The offered example is particularly desirable as it features an early HULK vs. This Comic has been graded at the CGC 9.2 tier. Adding to its desirability, it has retained near newsstand-fresh Off-White to White Pages. CGC Grader Notes: light bend left top of back cover, very light creasing to cover, very light soiling on cover, very light spine stress lines to cover Synopsis: And in this Corner...

Still trapped beneath the Earth following his encounter with Tyrannus and the Mole Man, the Hulk wanders around aimlessly trying to find a way back to the surface, but to no avail. Fed up with the constant wanderings, the Hulk begins trying to smash his way out. His actions do not go unnoticed on the surface, where the military has been tracking the Hulk's progress and have found that he is smashing his way to San Andreas Fault, which if pummeled by the Hulk would risk causing the west coast to fall into the Pacific Ocean.

In order to deal with this threat, the General Ross has his men prepare the Gammatron Bombarder and calls upon the Avenger to aid the military in stopping the Hulk. Answering the call are the Avengers (Goliath, Black Panther, Quicksilver, Vision, and the Scarlet Witch). After a briefing the group leaves with the military aboard an aircraft with the Gammatron Bombarder device. They track the Hulk to his very location and find no means of getting into the underground caverns below. The Hulk meanwhile, has once more become enraged at being trapped and strikes the walls of the cavern he is in.

The blows cause an earthquake on the surface destroying the Gammatron device. The Avengers send the immaterial Vision down to try and engage the Hulk. The Vision confronts the Hulk, and naturally the confused monster attacks the Avenger, who defends himself with his powers. He goads the Hulk into plowing through the roof of the cave and breaking through to the surface. There the Hulk is attacked by the Avengers, but Hulk manages to keep the Avengers at bay when they attack him one by one.

However, when they put in a united front, their attacks disorientate the Hulk. When the Hulk tries to throw a helicopter at them, the Scarlet Witch fires a hex bolt that causes the copter to explode, jarring the Hulk enough for Goliath to swat him. As the battle is raging, Quicksilver and Black Panther have repaired the Gammatron Bombarder device, and Goliath manages to lure the Hulk to the device. Activating the weapon, the Avengers bombard the Hulk with super-strong gamma rays. This in turn weakens the Hulk momentarily, however the jade giant manages to withstand the beams and forces them back into the device causing it to explode.

With the Avengers partially disorientated due to the explosion, the Hulk tries to escape, however he is weakened enough that his jump is too weak, and he falls into the woods not far away. Unaware of this, the Avengers and the military depart believing that the Hulk is probably miles away, passing by the once more unconscious Hulk who has reverted back to his Bruce Banner persona.

I adhere to the grading standards laid out in the Overstreet Grading Guide. Feel free to contact me with any questions. Sign up for my newsletter for special discounts and offers. This item is in the category "Collectibles\Comic Books & Memorabilia\Comics\Comics & Graphic Novels".