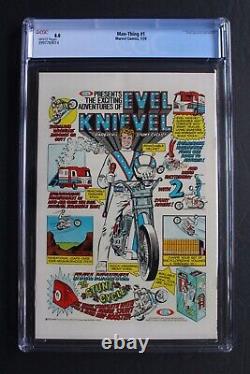 First MAN-THING Series Begins under his Own Title. Continues from MAN-THING's former Series in FEAR. Second appearance of HOWARD THE DUCK.

Second appearance of KORREK the Barbarian. JENNIFER KALE (the Witch Woman) and DAKIMH the Enchanter appear. First appearance of Gods of Therea. Battle for the Palace of the Gods!

Vs Thog the Nether-Spawn / Overmaster and Congress of Realities. Val Mayerik and Sal Trapani art. MIDNIGHT SONS MCU Movie in Development; A new supernatural Avengers team has been reported for the MCU!

This team will be the Midnight sons team from the comics consisting of character like Blade, Doctor Strange, Moon Knight, Ghost Rider and more. This team will take on villains like Mephisto and Shuma Gorath in the MCU. BLACKOUT is Expected to be a Major VILLAIN.

Doctor Strange in the Multiverse of Madness. Will address darker heroes and darker villains including some demons and monsters that will start a supernatural side of the Marvel Cinematic Universe.

The Supernatural Avengers Midnight Sons will start to form as a part of Marvels Phase 4 lineup. HORROR and SUPERNATURAL Comics by MARVEL. MARVEL responded with a Wave of Excellent HORROR Series, well written with good Characterization, and great artwork.

This Title is among the Classic SERIES by Marvel, that were among the Beat Loved and Remembered Series of the Entire Bronze Age of comics. The Demand form 1970's Marvel HORROR Comics, is RISING FAST, because of all the TV and Movie Series attention the Marvel Supernatural Heroes have been getting (especially Midnight Sons, Ghost Rider, Morbius, Werewolf by Night, Blade, Mephisto, Shuma Gorath and Brother Voodoo). STINE (famed Goosebumps author) in his comic book writing debut, wrote the new Five-issue MAN-THING in 2017. The new Limited Series will feature German Peralta art with Tyler Crook covers; In Man-Thing #1 the MAN-THING heads to Marvel Studios' hometown of Burbank, California, to find out why he hasn't had a major motion picture. The 2005 MAN-THING MOVIE (Lions Gate Films/ Artisan) was Directed by Brett Leonard, had a Steve Gerber & Hans Rodionoff story, Starred: Jack Thompson, Matthew Le Nevez, Steve Bastoni.

Authenticity is Verified by CGC. ALL Canadian residents must pay current Applicable Canadian. (as Required by your Province & as Required by Canadian Law). ALL Manitoba residents, in addition to the.

(as Required by Canadian Law). (3) SAVE TIME locating the items.

(4) GET them from a RELIABLE source. (5) STRICT GRADING, by a DOUGLAS W. SULIPA, a Veteran Comics Dealer & top Overstreet Senior Advisor (Since Guide #2 in 1972). (9) GIGANTIC Selection (One of the Biggest on Planet Earth). (10) Reasonable Market Value Pricing.

>> 600,000 Pounds of inventory jam packed into an 8000 Square Foot Warehouse; So much material, we will NEVER get it all catalogued. This item is in the category "Collectibles\Comic Books & Memorabilia\Comics\Comics & Graphic Novels". The seller is "dwscw" and is located in this country: CA.