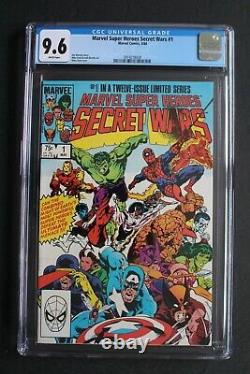 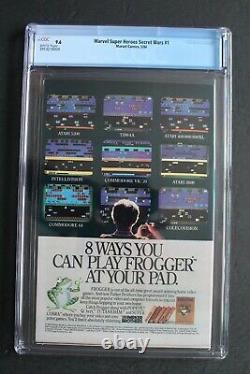 Avengers Secret Wars and Battleworld has been LEAKED as the Next big MCU Event!! First appearance of the BEYONDER. The WAR BEGINS, Part-1 of 12-Part story. Marvel's BIGGEST Crossover Event of the 1980's (and the One that Lead the Way for all the Other Huge Up-Coming Crossover Events for all Publishers), BEGINS. MOST Marvel Super-Heroes, many Villains and most Teams app; Includes; Spider-Man, new X-Men, Avengers, Wolverine, Hulk, FF, Avengers, etc.

SECRET WARS was Re-Booted in Huge Crossover Event in May 2015. By the creative team is Jonathan Hickman and Esad Ribic; ALEX ROSS Painted depicts multiple versions of Marvel's top heroes, Captain America's, Thor's and Iron Men, as well as other notable heroes as well as some relative unknowns.

ERROR depicts GALACTUS in BLUE COSTUME with WHITE Helmet, Boots and Gloves on Left-Hand Side Centerfold Page (Rather than the standard PURPLE/RED or PURPLE/BLUE Costume); [Some Sellers have called this a "BLUE" VARIANT, but I have checked over 100 Copies and have NOT seen a Single Copy with this CORRECTED, thus it is NOT a Variant]. Classic MIKE ZECK & John Beatty Art. Authenticity is Verified by CGC.

ALL Manitoba residents, in addition to the. (as Required by Canadian Law). (3) SAVE TIME locating the items.

(4) GET them from a RELIABLE source. (5) STRICT GRADING, by a DOUGLAS W. SULIPA, a Veteran Comics Dealer & top Overstreet Senior Advisor (Since Guide #2 in 1972). (9) GIGANTIC Selection (One of the Biggest on Planet Earth). (10) Reasonable Market Value Pricing. Sulipa, an Overstreet Comic Book Price Guide SENIOR ADVISOR for 45+ years.

{since Guide #2 way back in 1972}. >> Read my Annual MARKET REPORTS in the Annual OVERSTREET Guide. DOUG SULIPA'S COMIC WORLD -- We have IN STOCK.